Ground penetrating radar: Searching for the second wall in Jerusalem

Within the framework of the DFG-funded project of the German Protestant Institute of Archaeology (GPIA) and the Technical University of Ilmenau, our two colleagues J. Sachs and T. Just searched for the Herodian city wall under the present Christian quarter of the Old City of Jerusalem. The technical aim of the project was to use a new type of georadar to explore and prove the course of the so-called second wall.

The knowledge about the location of this second city wall was lost after the reconstruction of Jerusalem. Earlier attempts to identify this wall have been unsuccessful. Until now.

The history of the second city wall

Herodis the Great renewed the temple in the second half of the 1st century B.C. and founded a new city district west of the temple area. Thus, he also built a second city wall to protect this settlement expansion. During the Jewish war, this wall was besieged and destroyed by Titus in 70 AD. Later, Jerusalem was levelled and rebuilt with its own rubble. In this process, knowledge about the course and the localization of the second wall was lost.

Challenges To find the Wall

In order to build a suitable ground penetrating radar system, different methods of antenna design and sounding signals than the traditional ones had to be used.

The Large Current Radiator (LCR), which was first mentioned by H. F. Harmuth more than 35 years ago, was redesigned and improved at key points and operated with pseudo-random signals that are unconventional in georadar.

The result is an efficient and small antenna principle which can be used for georadar and microwave imaging. The radiation element, which is only 10 cm long, generates a probing signal with an operative frequency band of 5-250 MHz. The scaling of the antennas also allows operation in higher frequency bands in the GHz range for non-destructive testing and medical microwave imaging. 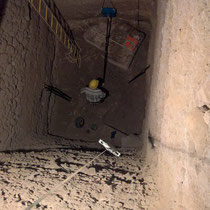 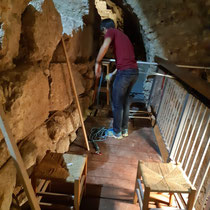 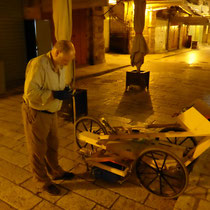 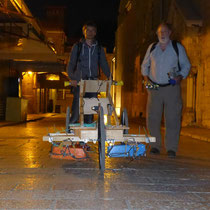 To avoid the heavy traffic in the streets of Jerusalem, the measurements were always taken after midnight. A total of four measurement campaigns were carried out in which the radar was repeatedly tested and improved.

Using historical evidence, topographical considerations and excavations below the Church of the Redeemer, the team narrowed down the search area.

First, the team tried to find the second wall from a deep cut below the Church of the Redeemer, unfortunately with little success. In the direction of the east wall no evidence for the existence of the second wall was found neither.

Using all the evidence from the radar measurements, archaeological evidence and typographical events, the probable course of the second city wall was interpolated using the geophysical data.

Even if the exploration of the second wall is not possible due to the lack of excavation possibilities, our colleagues have come a little closer to the secret of the second city wall.